My Perfect Menu Board 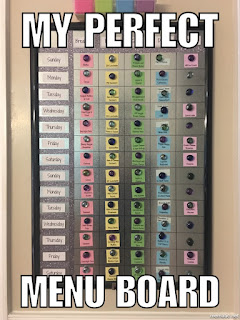 I've seen dozens of menu planning boards pop up all over Pinterest lately.  There are simple dry erase versions in glass picture frames and ones with a dozen categories so you don't accidentally eat fish 2 nights in a row.  I wanted one- but one that fit my exact needs.  I needed a way to organize my meals and the thoughts that go into them.  I cook 3-4 meals a day. My kids go to school and each need a breakfast in the morning, and a packed snack and lunch every weekday. My husband goes to work and prefers that I pack him breakfast, snack, and lunch every morning. That's a lot of food to organize before 7:30am- when I leave to take the kids to school. Husband's has to be done by 4:30am.  It was time for a solution that simplified my meals.  I used to do the basic dry erase board but it seemed that no matter how much variation I started with, within 6 months we were back to the same 15 or so meals.  Boring.  I'd forget about things I'd made or forget how I made them, and they were lost to the abyss that is my mind sometimes. For years I didn't do anything more than a notepad on the fridge.  But the exact same thing happened.  So I made a goal.  Spend the first half of 2017 working on my recipes and writing them down.  That latter part was very hard for me. Cooking took twice as long because I had to stop to measure and take notes with every move I made.  You see, in 2008 I read the Joy of Cooking pretty much cover to cover.  I found myself with a LOT of free time as the stay at home mom to a baby who slept 21 hours a day.  Husband, who was a boyfriend at the time, worked a ton and had a lot of friends.  He wasn't home much.  We were very young and lived in an apartment near no one that I knew in a time before Facebook had local events to meet other new moms. Saying I was a tad isolated is an understatement.  To stave off the boredom, I decided to learn to cook from scratch.  Fast-forward 8 years and I rarely use recipes now.  It's become second nature and cooking is my favorite time of the day. In the 8 months since I started writing down my recipes, I've amassed a few hundred that we love.  Some old classics and some modern recipes with a twist.  It's a solid collection that I'm very proud of. They all got typed up and put into sleeve protectors in binders. 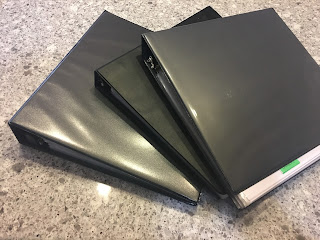 Now I just needed a way to organize them for use- and we're back to the need for a menu board.  I looked on Pinterest and found a couple that were close to what I needed but nothing exact. So, I scoured around in the garage and found a piece of sheet metal that came from who knows where.  No one seemed to remember where it came from so it wouldn't be missed if I screwed this up royally. I wanted this board as big as I could get it to hold at least 2 weeks of 5 meals per day. The metal was 20" wide and nearly 8' long.  I found a frame at Walmart that was meant to hold posters that were 20" x 30". The perfect size for the wall where the board would go. It would require me to cut the metal only twice to make it fit. While at Walmart I also found glittered tape, glass gems, adhesive labels, magnets, and a desk organizer that I planned to re-purpose into storage for my menu cards. I had cardstock and scissors at home to make the cards. 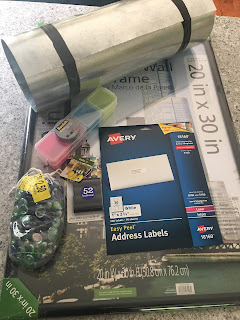 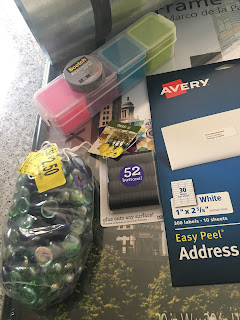 The first thing I did was measure and cut the metal. The bottom edge wasn't straight so I used my trusty square to get it right.  I used the paper from inside the frame to measure the metal piece. I popped it into the frame with the plexiglass behind the metal to provide a bit more stability. 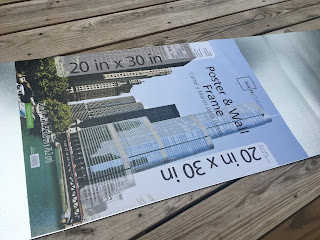 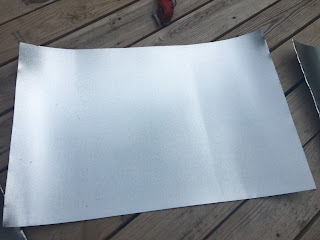 The next thing I did was measure out my lines for the boxes.  While the metal was still in the frame, I marked the corners so I knew how much space I lost behind the frame. I wanted the boxes to be as even as I could get them.  The pencil in the photo is pointing to a very light mark showing that lost space.  now before we go any further, ignore my rusty square. I love that thing and can't bring myself to replace it yet.  After we lost everything to a house fire in early 2010, that square was the first tool I bought and used it to get my creativity back.  She measured fabric for Halloween costumes, paper for making homemade cards, sizes of rolled pie dough, and even helped me redo a piece of furniture I got for free. She still works perfectly and I can still read the measurements. She gets to keep her job for a bit longer. I needed 6 boxes across: day of the week, breakfast, lunch, snack, dinner, and dessert; by 15 boxes tall: meal, and 14 days worth of space. My measurements aren't important as its unlikely you'll need the same ones for yours. I marked the lines with Sharpie. 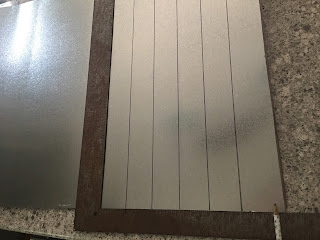 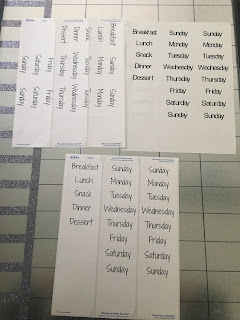 I used the glitter tape to separate the categories and just to make it look a bit prettier. It was totally unnecessary but I love it.  The address labels were used to mark the categories.  It took me 3 tries to get them formatted properly.  The company isn't joking when they say to print a test sheet on plain paper.  I had to trim the ones for the meals to make them fit. That night I laid out wax paper and newspaper to glue my magnets onto my glass gems.  Did you know E6000, my favorite glue ever, comes in black?! I didn't and accidentally grabbed that tube.  Figures.  In the end it didn't matter- the gems glued and you couldn't see the black. 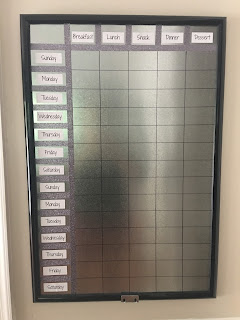 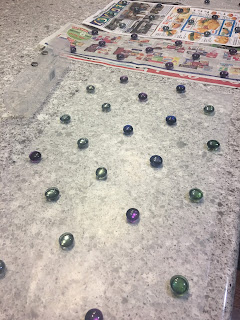 The frame is hung by the tab on the back, but because it is quite a bit heavier with the metal and magnets, I found a corner hinge laying around and bent it to support the bulk of the weight of the frame from the bottom. I took a second hinge and flattened it. It sits above the frame and my desk organizer, with the help of 2 glued-on magnets, attaches there. 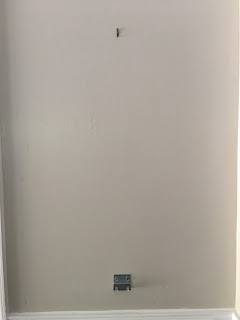 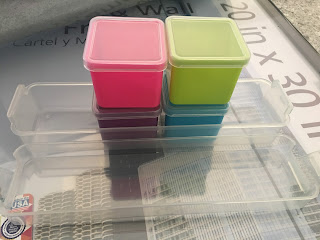 I used Excel to print out the menu cards.  My first go round looked like this. 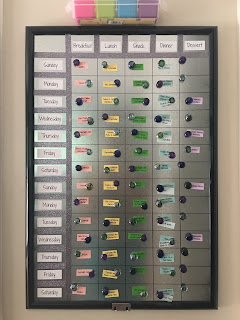 I cut them with scissors so they were uneven and once on the board you couldn't see them with the magnets in the way.  I bought a paper trimmer and more cardstock, since I exhausted my supply the first time around. 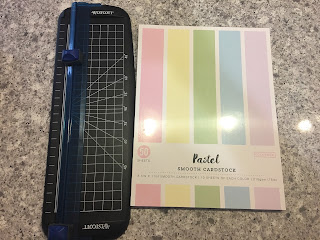 The second time was exponentially more successful.  It looked uniform and organized.  The dinner category has 2 sets of cards- dark blue is for main courses and light blue are the sides. 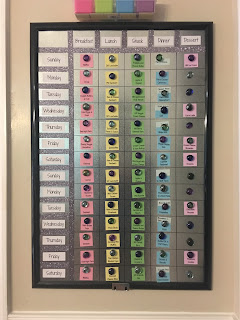 So now, every 2 weeks, we'll lay out the cards for each category and see what we want to eat.  I'll fill in the gaps with the recipes that will use up excess ingredients and leftovers which should save us money and time in the end.  For example- on nights we have pizza, I'll double my dough recipe and bake calzones or pinwheels for the following days' lunches. This saves dishes, energy to preheat the oven, and time.  If we have mashed potatoes for dinner, I'll make a bit extra and turn those into bacon, cheddar, potato cakes for breakfast.  Hopefully this cuts back on my overall time in the kitchen a bit and allows me to take up new hobbies. Just kidding, I have PLENTY already... Meet my favorite hobby.  The roughly 150,000 honeybees I hang out with regularly. :) 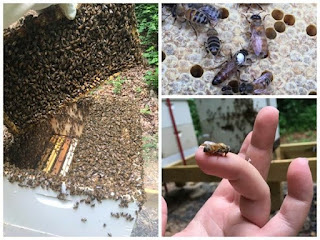 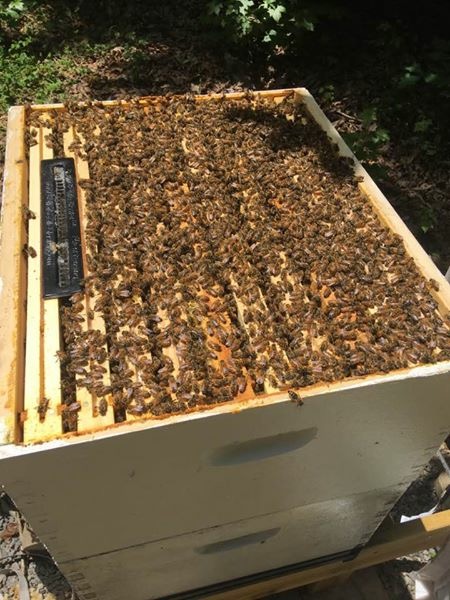