When we decided to get chickens, we started thinking about the type of coop we'd want.  I drew up this awesome one that I thought would be cost-effective for its size.  I was wrong... again.  We took the picture and list of lumber to different lumber yards to price it all out.  The cheapest quote- just under $1000.  Do you have any idea how many eggs I'd need to produce and eat to justify that?! I ripped it up and tossed it. Onto Plan B. Plan B was to take an existing structure, modify it, and add a run. I scoured craigslist and local yard sale type sites looking for the perfect playhouse/ treehouse/ shed.  I found none that were cheap and in decent condition.  Then Husband remembered our newly moved-in neighbors had a tree fort on their property they had no use for.  Knowing we had kids, they offered it to us.  If only he had remembered this before I spent an entire afternoon scouring the internet. Oh well.

Husband loaded up the bucket of the tractor with tools, (and beer) and headed out.  He returned hours later with the playhouse in tow.  He literally used the swing that it came with to drag it half a mile to our house. During the take-down, the legs holding it in the tree snapped too early and the house tumbled down and rolled twice.  Since it survived that, we knew it could withstand a few chickens. 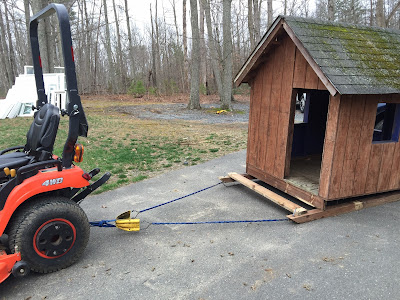 The "sled" was build out of leftovers from taking the porch apart. 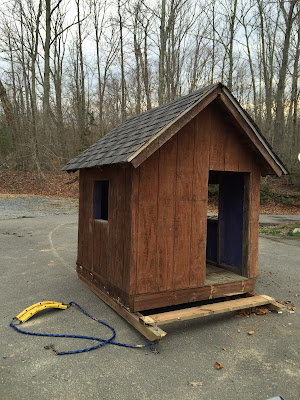 The windows and door were already framed in. 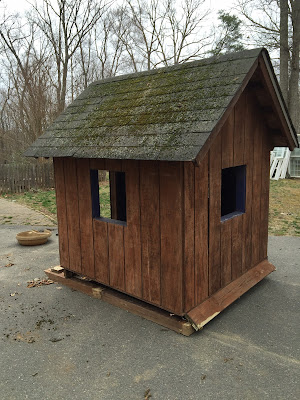 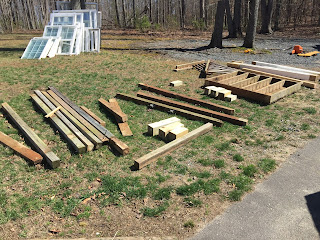 This is the scrap that came with it. 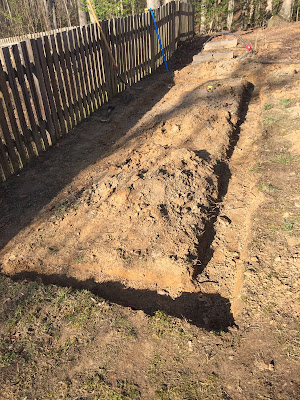 The trench that held the 4"x4"s for the base 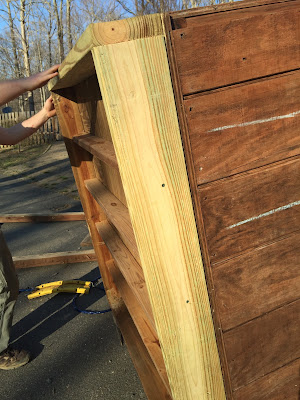 The bottom got a bit torn up so we replaced the 2"x6's. 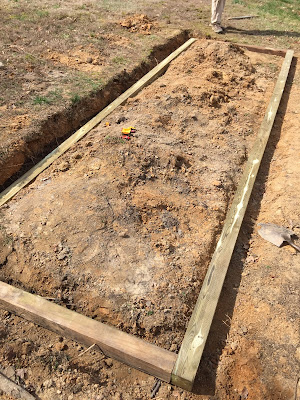 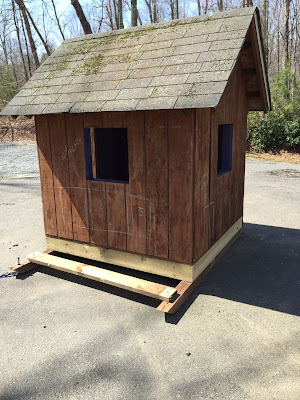 I took a piece of chalk and scribbled my plans on the sides- those changed as I wanted the clean-out door and peak in specific spots. 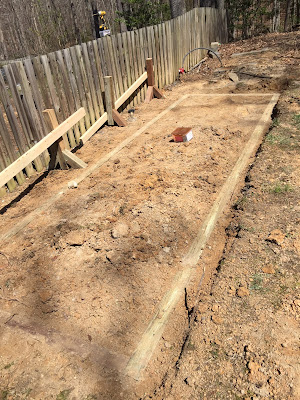 The legs were temporarily held together with 2"x4"s until they were screwed into the coop base. 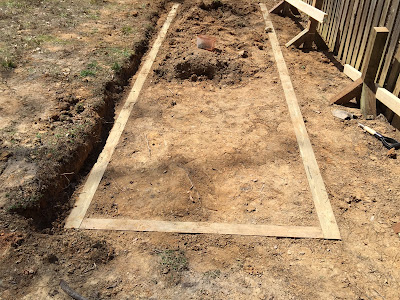 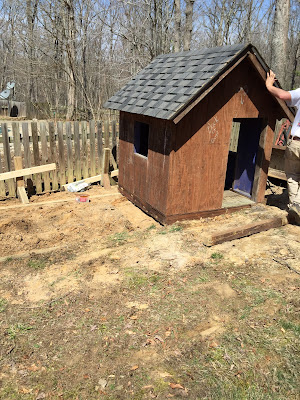 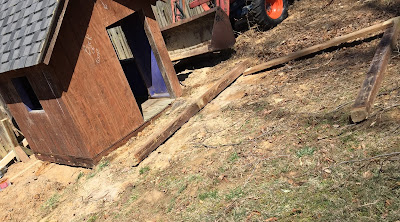 Using a tractor to lift half of the house to place the legs under. 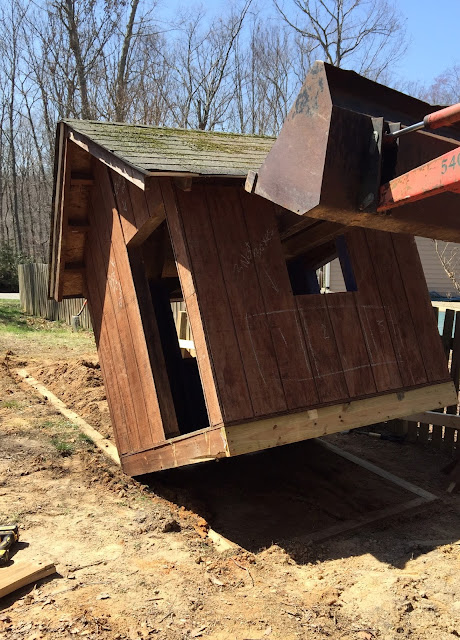 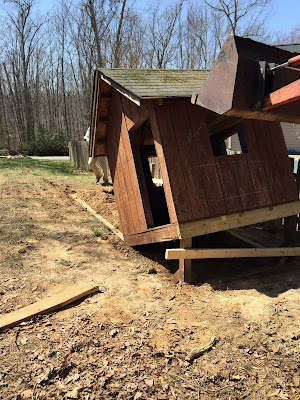 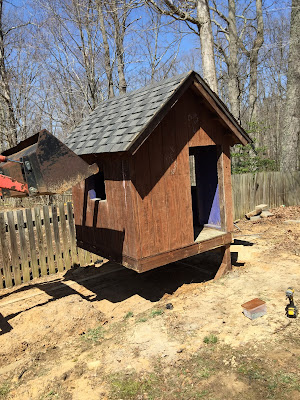 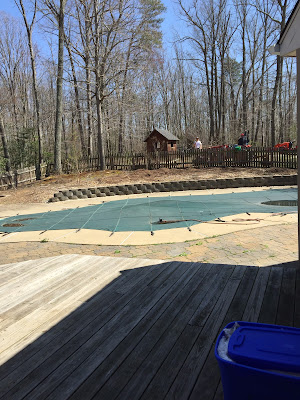 The view from my kitchen: Pool, garden, chickens. 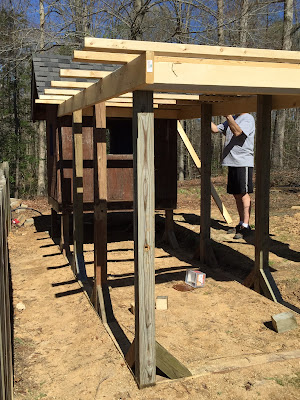 The run taking shape. If you come to visit us- be prepared to help build (or demolish) something! 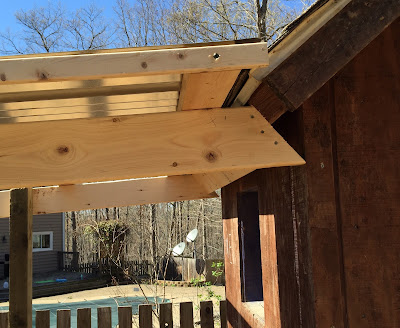 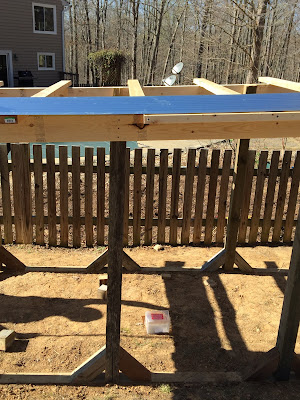 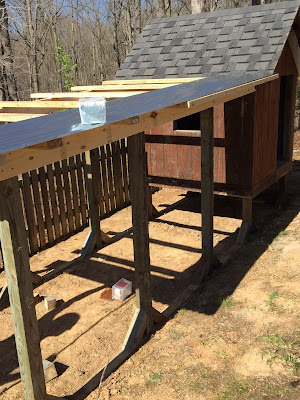 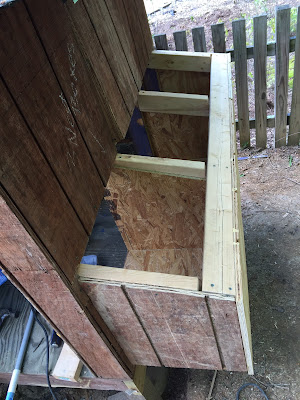 3 nest boxes framed in and covered with some scrap and some new T-111. 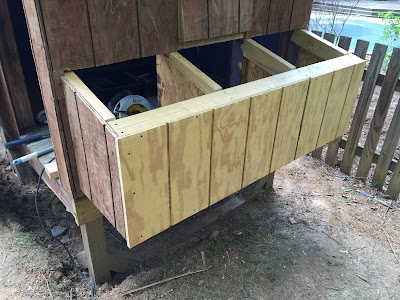 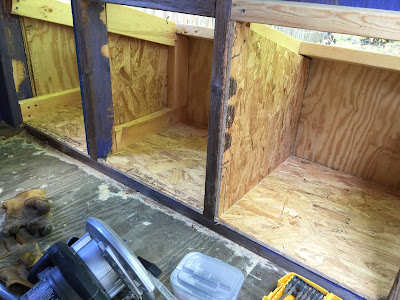 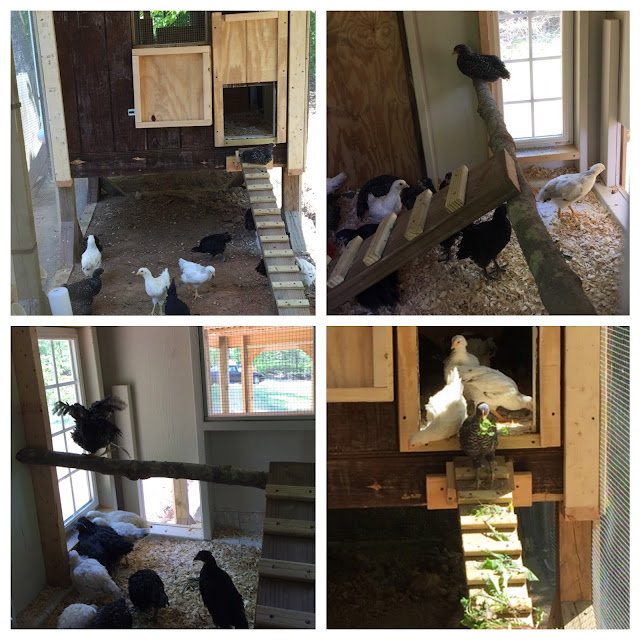 The girls' first time in the coop. I had to bribe them with fresh greens to venture out into the run. 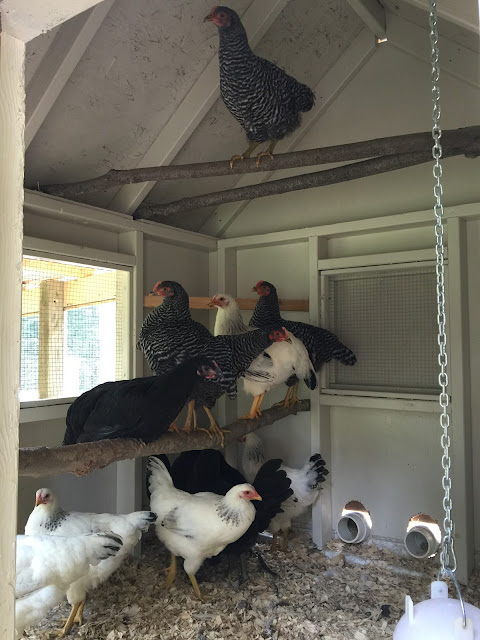 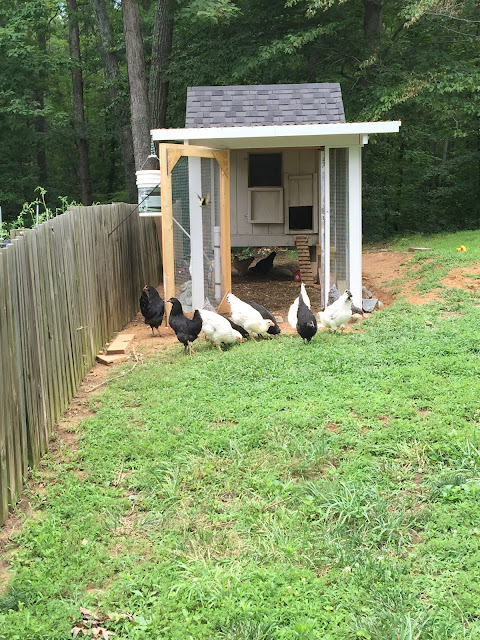 They've all almost reached full size.  Each chicken's personality is beginning to show through.

We made PVC gravity feeders and have a 5 gallon bucket plumbed in with chicken waterer nipples but that will be replaced by a 55 gallon rain barrel.  The outside of the run was covered in hardware cloth to keep predators out.  The girls free range most days while someone is home and get locked in at night.  Our dog has become a fantastic chicken herder and makes the farming part of my life exponentially easier.