Now that the major construction inside is coming to a close, I can start focusing on the smaller details. It's time to start painting!  The half bath on the first floor is in fine working order- but for my mental sanity (and to check paint colors) I need just one room completed.  I need one room where I can go in, shut the door, and visualize the finished home. Since the half bath just needed cosmetics, that's the room I chose to finish first.  It was small and dark. Some paint would go a LONG way in there!!! This is what it looked like: 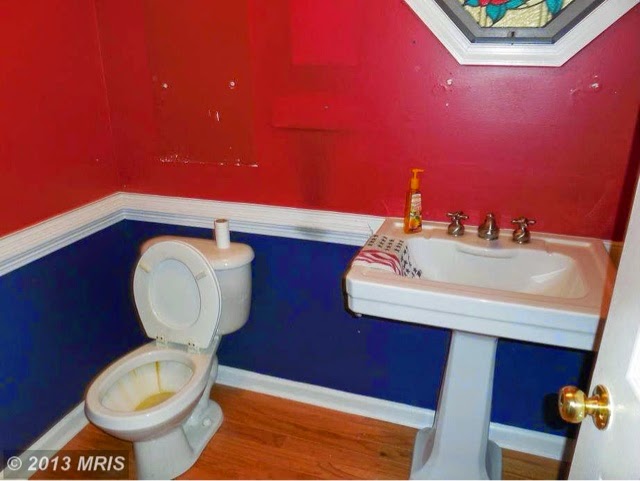 Very.... Patriotic? You can't see it in the picture but the wall with the door in it is cream and burgundy gingham wallpaper.  I love America- but when using a restroom I prefer a spa-like atmosphere to the Star-Spangled Banner.
To get this place turned around, I painted all the trim white first. I overpainted everything. My light gray beige (greige?) wall color will easily cover the extra white and I only wanted to tape the trim once. Then I caulked. You basically squeeze a bead of white bathroom caulk along all the trim and use a handy little rubber corner tool to pull it into a perfectly smooth surface.  There are other ways to caulk but this is ridiculously fast- and cheap! 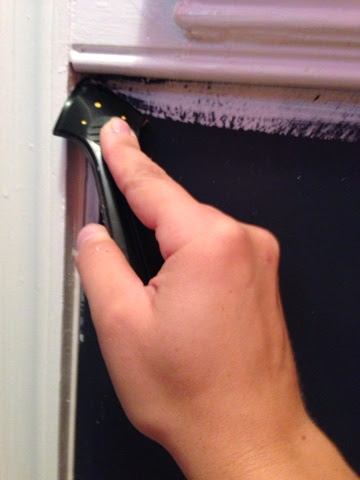 This was my arsenal. Mildew resistant white caulk (it is a bathroom afterall), a caulk gun, a sharp tool to remove old caulk (I barely used this as the old caulk was so old it basically fell off when I gave it a dirty look), and my caulk spreader. 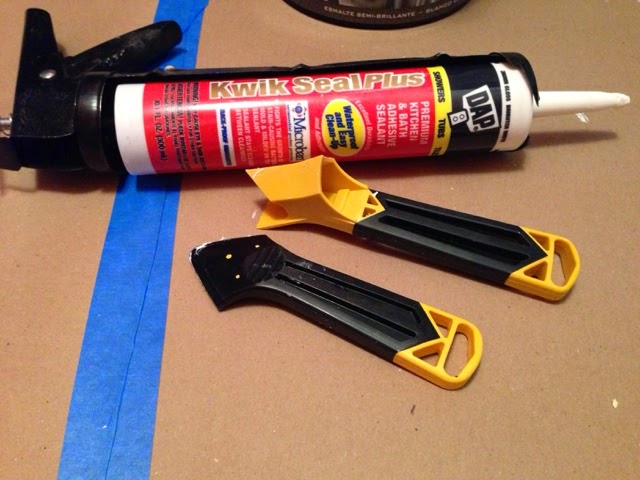 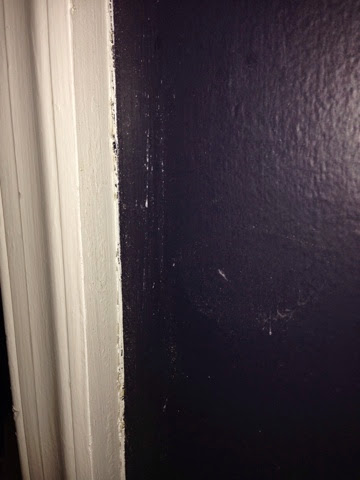 After a bead of caulk was added (before it was smoothed)- 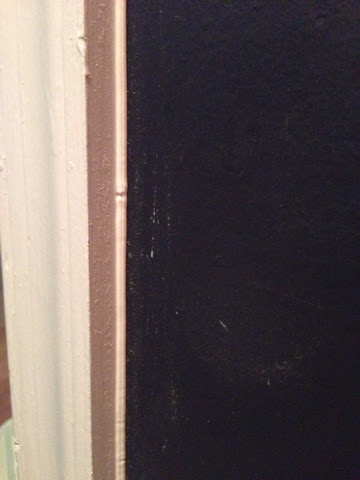 And after it was smoothed. Once the wall is painted you won't see the feathery edges. 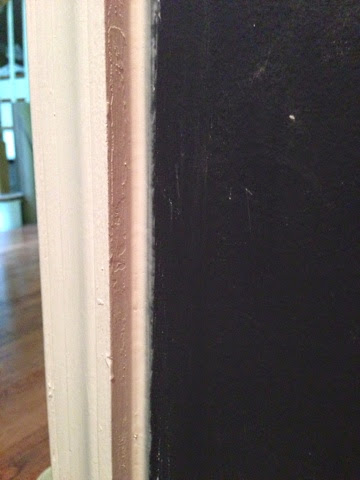 Then I painted the walls.  The Behr Premium Plus paint I used covered the dark walls surprisingly well. I rolled on 2 coats of the paint leaving a gap near the corners, ceiling, and trim. 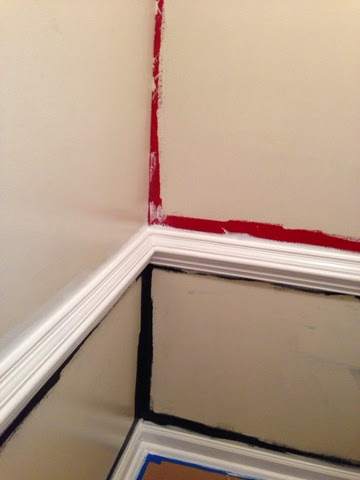 Then I taped everything off and used an angled paint brush to edge. 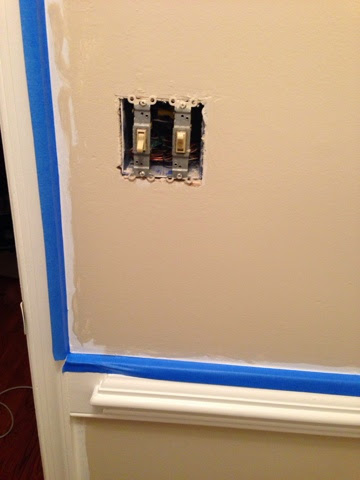 While the paint dried, I decided to tackle the patch in the ceiling.  When the plumber replaced all the old PB pipes, there were large holes in my house.  Some were in the textured ceiling.  Brother-in-law and Husband patched the drywall but it was up to me to make it match the surrounding texture. Here's what I started with 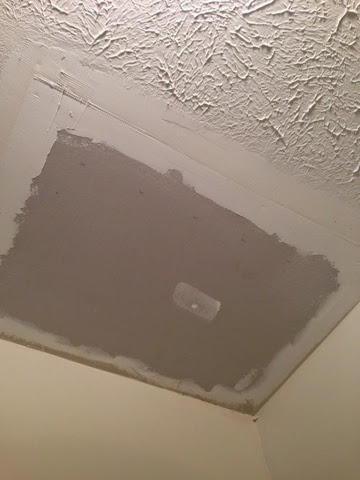 I put a thin layer of my drywall mud over the whole thing. It's the same stuff I used to patch all the holes in the walls. 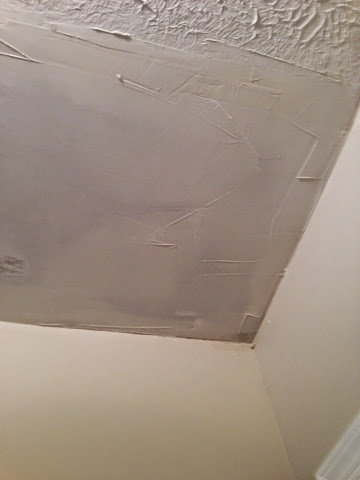 I didn't worry about getting it perfectly smooth as I was about to mess it all up anyway.  The mud was way too thick the way it was so I decided to add some water to it to get it to a drippier consistency.  That's what the texture reminded me of. It looked like thick waffle batter when I was done adding water. 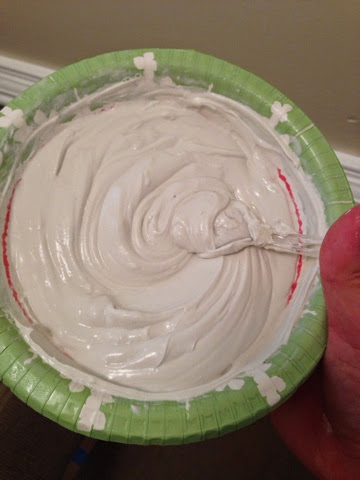 I used paper and plastic instead of real dishes so that I wouldn't have to wash them out.  This stuff makes a mess- you've been warned.  I tried to apply it with various sponges and tools I found laying around and nothing seemed to get me even close to what I was looking for.
And then it hit me.
I accidentally put my hand in a bowl of icing one time and the texture looked exactly like what I was aiming for! I had nothing to lose so I went for it.  I glopped a whole bunch in my palm and smeared it onto the ceiling.  Then to get the texture I pressed my hand into the wet, soft mud and pulled it straight down- the result was perfect!! 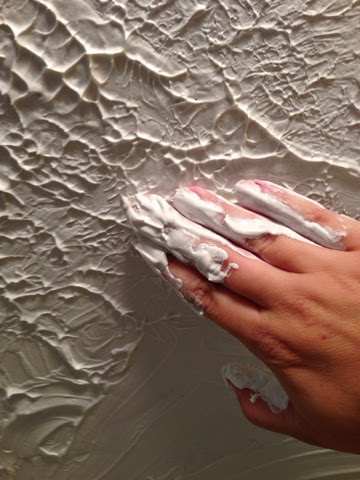 Here it is when I was done but before it dried. 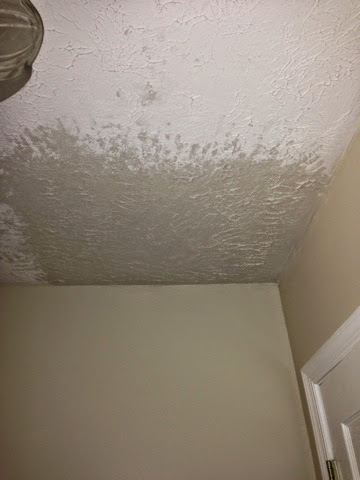 I feathered it out into the existing ceiling to blend the textures and blur the lines. 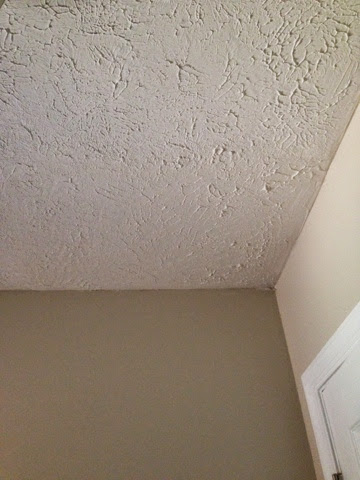 I have yet to paint the ceiling but it's great as is for now.
Once the paint dried I just felt the room needed a bit more oomph.  Some more class. I decided that the 2 long walls needed thick gray stripes above the chair rail.  I plan to do the same stripes in the dining room anyway.  This would be a good trial run and a way to tie them together.  This room, as opposed to my large dining room, would be easier to repaint if I hated them. Then came the math.  I knew I wanted 5 stripes. The space from ceiling to top of the chair rail was 61.5".  61.5"/5 stripes= 12.3" per stripe.  My tape measure doesn't have accurate .3" markings so I decided to make the highest stripe a hair bigger to leave me with nice easy numbers.  The top stripe would be 12.5" and the other 4 stripes would be 12.25".  Almost no one could recognize a ¼" difference in such wide stripes. 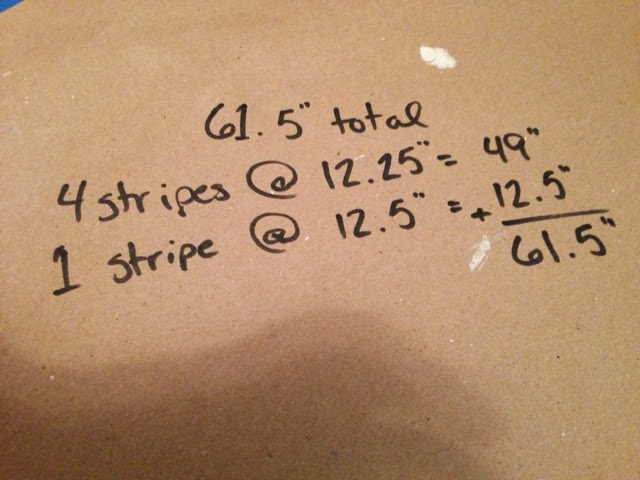 To tape out the stripes I needed to know where to measure from.  Always measure from the the same place for each measurement.  Unless you're in the middle of an earthquake or some other major disaster it's highly unlikely that the ceiling height or floor height will change on you during taping.  On the other hand. You could slip and mis-mark a stripe and not realize it until it's too late.  I marked the bottom of the first stripe at 12.5" down from the ceiling. Then the next stripe would end 12.25" lower at 24.75" from the ceiling. The 3rd at 37", the 4th at 49.25".  The 5th stripe ends at the chair rail so no need to mark that.  Once everything was measured, I did measure 12.25" up from the chair rail and hit the stripe mark perfectly. 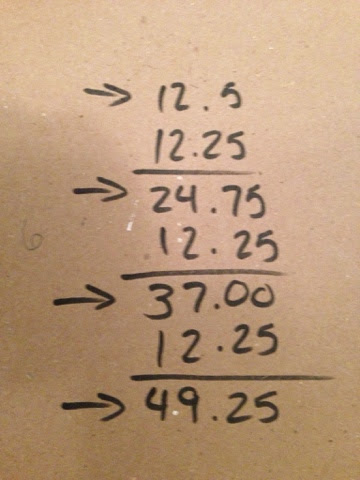 Since everything was lined up, it was time to tape.  Remember to place your tape so that it's on the outside of the line of the stripe you plan to paint.  The greige stripes have the tape placed on them so they appear smaller during the taping process. 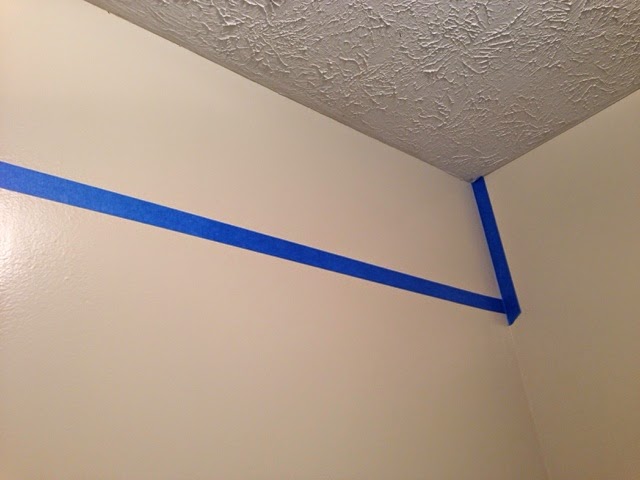 I also taped off the corners so that I wouldn't get paint on the adjacent walls. 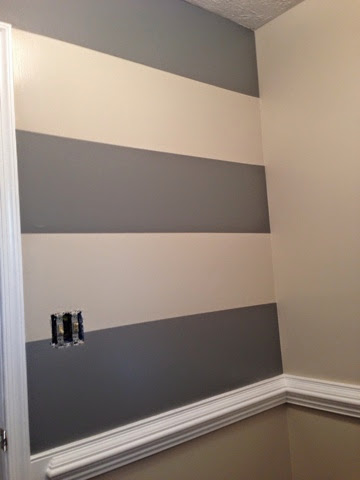 As soon as you finish painting a stripe, remove the tape!  It's much easier to remove when the paint is still wet.  Once it dries you have to score it with a knife or risk small pieces along the edge peeling up. 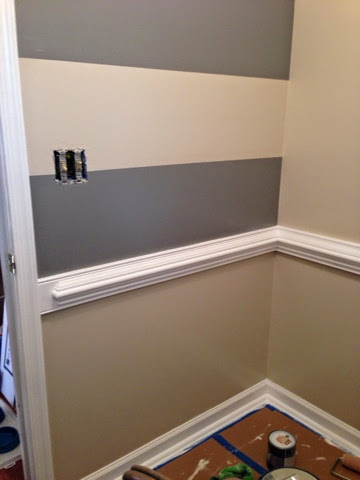 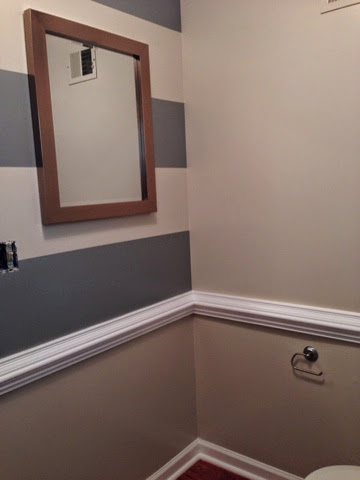 They really add a nice touch against the gray.  Over the sink is a window- so I couldn't put a mirror there.  The only other place it could really go was on the wall opposite the sink.  It works great in the space. I centered the mirror on the stripes and it's the perfect height. I was so excited about finishing that I actually snapped the photos before my gray stripes were even dry!  The lighter spots you're seeing on the wall is wet paint- Whoops! 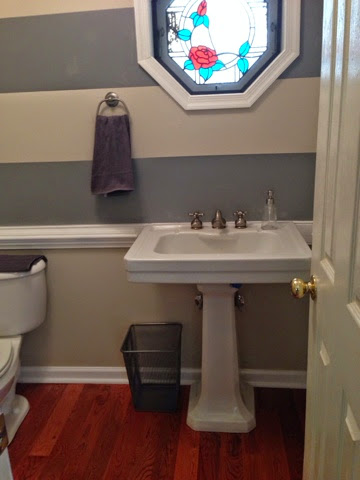 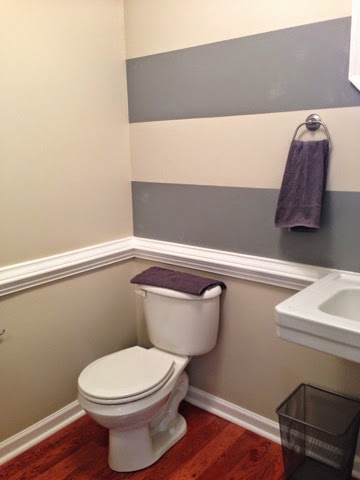 It feels amazing to have 1 room completed.  As unsure as I was about beige and gray stripes- they're perfect!!! Warm yet modern. This color scheme will continue through much of the first floor with a pop of antique Mason jar blue here and there.
Behr makes an awesome color match phone app!  You upload or take a picture, click on the color you want to match and it pulls up a matching paint color.  I found a couple of pictures of blue Mason jars online and used those for the app. Different jars gave me different color results depending on where I clicked on the picture- the thick highly pigmented rim, the wall, etc. Here are the colors I like best in the results. These are screenshots of the app. 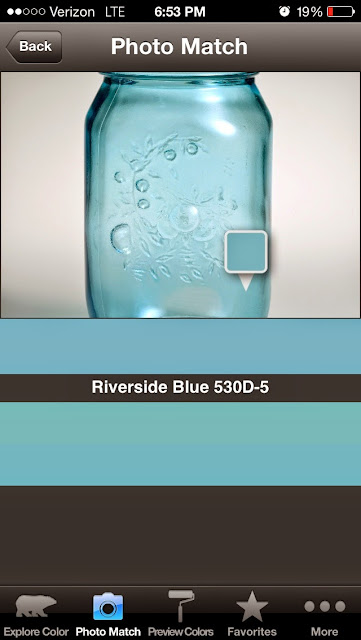 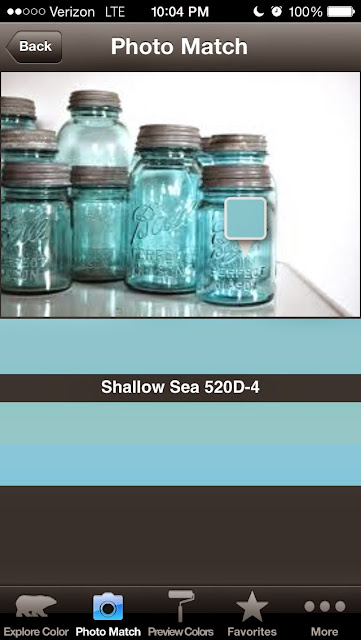 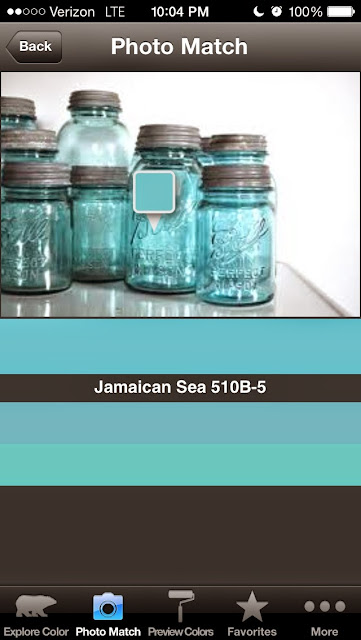 I'm leaning toward Jamaican Sea or Riverside Blue.  I won't do anything with this paint until my backsplash arrives.  I need to make sure it coordinates with the blues in that.
This week my countertops arrive!!!!!!  The company actually sent me an email saying they were done and ready to be installed but I'm currently in Idaho on vacation with the family.  They'll have to wait a few more days.  I'll return refreshed and ready to tackle cabinet painting- Oye!
Posted by Our South House at 6:12 PM